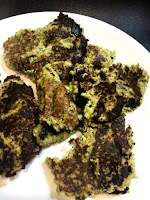 This cooking experiment is a vegan twist on a recipe for broccoli fritters that I found online.  I cooked the original recipe before and it turned out pretty good.  The fritters held together well and kept their shape.  I wrote the recipe down in my recipe notebook for future reference.

When I made it again this time, as I was gathering the ingredients, I realized that I was missing eggs.😕  I googled egg substitute.  One solution was flax meal with water.  Perfect, I had flax meal.   It said to stir well until gelatinous.  It never got gelatinous, but whatever, into the batter mixture it went.

Then I thought, since I'm not using eggs, I should just make these patties vegan.  I had Parmesan cheese and was planning to use it, but I substituted it with nutritional yeast.

The batter was a bit watery and the fritters didn't hold well together when flipping.  This was probably due to the egg substitution.  The taste was just okay, kind of bland.  I thought that the absence of Parmesan made a big difference because it's basically all of the seasoning that the patty has.  I wondered if I used nutritional yeast or Parmesan cheese the first time I cooked this.

I ate it with hot sauce to give it a kick since it was bland.  So I decided to look up the original recipe to see if I missed something.  Low and behold, I also missed Dijon mustard! I failed to write this ingredient down when I added it to my recipe notebook. That would've probably made the flavor a lot better.

In conclusion, I didn't initially intend to make it vegan.  It only turned out to be vegan because I didn't have eggs.  The original recipe was better.  I like eggs.