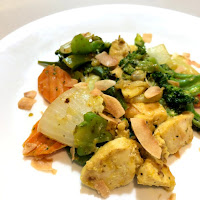 You don't need to add anything else.  You can just use what's in the kit.  Or you can add whatever you'd like.  There are some suggestions in the back of the package.  I added chicken, onions, and garlic to the kit.  Here's my version with my additions.

Okay, I was going to call this a fail.  But it really wasn't.  It depends on how you look at it.  It was an experiment and the flavors and textures did go well together.  I made it work.  That's what you do in life.  If something doesn't work, you pivot and change your plan.  After all, experimental is the theme of my cooking.

I had seen pictures of whole cooked cauliflower on Instagram and it looked kinda cool.  A quick internet search returned a recommendation for a cooking temperature of 350 degrees and cooking time of 15 minutes in the air fryer.  I don't have a regular oven, so I'm always looking for air fryer recipes.  I just needed to have an idea of how to cook it.

I made my own flavor combination and cooked it accordingly.  It looked appetizing, but was still hard when I tried to poke it with a fork.  So I cooked it for 10 more minutes, but when I cut it in half, the middle wasn't cooked through.  So I cut it up into florets to have it cook evenly.  My instructions below are for the way I made it. 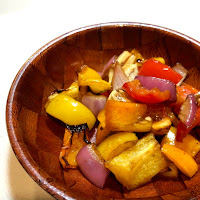 Here's a simple recipe for Air Fried Bell Peppers with Olive Oil & Vinegar.  I don't have much else to say about it.


I have made this recipe before.  I was thinking it would be like a spicy potato salad, but with pumpkin instead of potatoes.  It turned out great and I love the bite of the raw onion and garlic.  If you love onions, garlic, and spice, you'll probably love this dish.

The last time I made this, I chopped the pumpkin prior to roasting it in the air fryer.  This gave more texture to the pumpkin pieces and more mouthfeel.

This time, I wrapped the pumpkin in foil and chopped it after air frying.  This way is smoother, more similar in texture to an actual potato salad.

Either way is delicious.  It just depends on your preference.  I like both.  Recipe and instructions below are fore the smoother version. 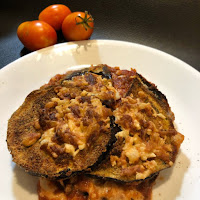 I like to buy a variety of vegetables from my favorite farmer's market.  I don't always know what I'm going to make, but I do know that I want to eat different dishes.

This time I bought a beautiful eggplant then had no idea what to make with it.  So I made this Eggplant Parmesan dish.  I only realized afterwards that I didn't add any Parmesan at all.  It still turned out delicious.

Here's the recipe for what I created. 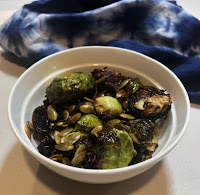 My friend recently treated me to dinner at a restaurant called Eating House 1849 in the International Marketplace in Waikiki, Hawaii.  We ordered a variety of dishes to taste and share including the Pipikaula, Brussels and Cauliflower, Spicy Ramen, Farmer's salad, Seared Fish, and their signature Chocolate lava cake.

The Brussels and Cauliflower was my favorite dish of all.  It came dressed in a balsamic vinegar sauce with pine nuts and raisins.  There's a tangyness from the vinegar, a crunch from the nuts, and a little sweetness from the raisins.  It also tasted like there was some butter in there.  I don't know if it was fried or roasted.

At home, I had dried cranberries and pumpkin seeds.  So this recipe is an experimental spin on it.  It turned out tasty, but the Brussels and Cauliflower is soooo much better.  I don't go to Waikiki often, but if I do, I'd definitely order it again.  Yum! 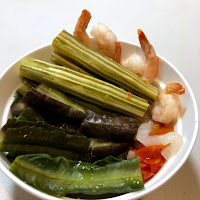 I always knew it as marungay and was raised calling it that.  The scientific name for this plant is moringa oleifera.  It is a tree that my parents and grandparents always had in the backyard.  The leaves and fruits are edible.  I love the idea of gathering food from your backyard.

I saw my aunt at a family gathering for Thanksgiving and she mentioned that she recently had a conversation with her friend about marungay and bone broth being very popular for the health benefits that they deliver.

I have seen a lot of ads about bone broth and collagen, but I didn't know that marungay was also being advertised as a super food. Her friend said that it's become so popular that baby marungay plants can now be found at the local Home Depot.

You know what my aunt's response to that was?  She thought that the popularity of bone broth and marungay was absurd.  Filipinos have been cooking and eating lauya for years!  If you don't know what lauya is, it's a brothy soup made with beef bones and marungay leaves.  Anyway, I just wanted to share that story because I thought it was funny.

While I was home for Thanksgiving, my grandma did a harvest from her yard and prepared some marungay fruits for me.  What a treat!  I was afraid I didn't know the recipe and I'm also learning that some vegetable combinations work better than others and some don't even match. LOL!  So I have to say that my grandma did give me some suggestions, but I added some other extra vegetables and it didn't match! LOL!  That's what I get when I don't listen.

So here is the recipe for what I created.  I think I wouldn't put the winged beans and eggplant next time.  My grandma also suggested ebi (dried shrimp), not raw shrimp. But the following is what I did for this dish. 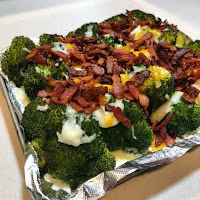 I had a bit of broccoli left from the bulk bag I bought and didn't know what to make with it, but didn't want it to go to waste.  I checked my freezer and found bacon and shredded cheese in the freezer.  So this was a perfect clean-up-the-fridge recipe.

If you watch my video(s), you'll see that it's obvious I had just taken the bacon and cheese out of the freezer.  I like to get certain things in bulk and freeze the rest.  It's cheaper in the long run if you use those items frequently.  Toilet paper, dish liquid, coffee and laundry detergent are some great examples.

But I have this problem with buying so much cheese.  I always think I'm going to just find a lot of recipes with cheese or eat a little cheese everyday.  Unfortunately, it doesn't work that way for me and I end up giving away my cheese because I have too much. I've bought cheese in bulk and gave away half at least five times already.  Lmao!

*Please note that I used a small toaster oven for this and you may need to adjust your cooking times and settings accordingly. 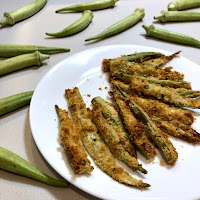 I got a bunch of okra from my aunt.  I made it two different ways and this is one of them.  It's a spin off my most popular video recipe, which is the Air Fried Ranch Panko Chicken Tenders.

The okra turned out with a golden brown crispy outer layer, perfectly tender on the inside, with a hint of slime. Delicious!

I enjoyed these and like this breed of okra.  I have been growing some in my container garden and the breed I have is more fibrous.  Mine need to be picked super young and small so it doesn't get too fibrous.  Fiber sounds good for your health, but fiber isn't very palatable. 😛

Here's my recipe for Air Fried Panko Okra.  It tastes great alone, but is also neutral enough if you'd like to have it with your favorite dipping sauce.  I had it with ketchup and it was like fries. I wondered if I should call them Okra Fries instead. 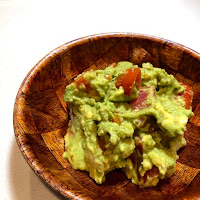 I absolutely love the idea of gathering plants from the yard and turning it into a delicious dish.  I made this simple guacamole with an avocado from my parents' yard and tomatoes from my grandmother's yard.  The avocado and tomatoes were grown organically on the island of Kauai.

I know a lot of people don't have easy access to fresh, organic produce.  I don't regularly have that luxury where I live either.   But I love to take advantage of it when I visit home. 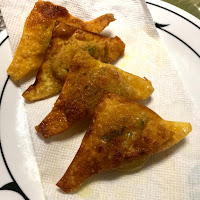 We made this at my sister's request.  This is one of those things that if you're going to make it, you'll make a big batch.  It's tedious, but worth it.

This recipe makes about 50 wontons. 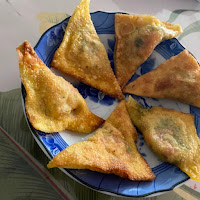