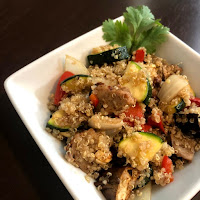 I was loving the whole quinoa salad thing and decided to try making a warm, savory, quinoa salad.  I harvested and incorporated an eggplant from my container garden into this dish.  However, I think the eggplant could've grown a little bigger.

I stabbed holes throughout the skin of the eggplant because that's what I had learned from roasting eggplant when I was younger.  But I think it might be for when you're roasting eggplants whole.  We would throw the entire eggplant directly onto the burning charcoal of the fire to roast.  We did this for a dish called tortang talong, which is roasted eggplant, skins peeled, flesh flattened down, dipped in scrambled egg, and fried.   I will go over that in another blog post/video.   I cooked the eggplant first  in my video because it takes longer.

It turned out great.  This recipe reminded me of fried rice because everything is all mixed into the dish.  But it made so many servings, I was eating it for days and I'm kind of tired of quinoa now.  It'll be a while before I make something else with quinoa.  If you'd like to try this recipe, see below. 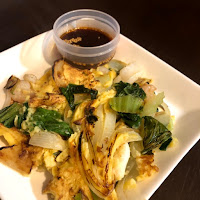 I wanted to make a Korean style pancake with a lot of vegetables.  I also wanted to experiment with chickpea flour since I already had it at home.  Supposedly, it's very nutritious but I don't know what it has, like vitamins or whatever.  You can google it if you're interested.  I know it contains fiber like any other bean and that's why you fart when you eat a lot of beans.

Real Korean pancakes don't use chickpea flour, a lot of recipes even say pancake mix.  My local Korean store stocks pancake mix.  I checked the ingredients for one of them, which were flour, baking soda, and msg so it didn't seem complex.  I basically looked at several recipes and made my own variation.  I also found a veggie pancake that sounded delicious.  I'll have to try that another time.

I think this turned out just okay.  My pancake didn't hold together as well as it should have.  This was probably due to the use of chickpea flour instead of regular flour or pancake mix.  Another thing that I would also change is the shoyu (aka soy sauce) in the sauce.  I used a brand called Kikkoman because someone gave it to me and that's what I had on hand.  He was gonna throw it out, that's the only reason I took it.  I didn't want it to go to waste.  But it has a distinct umami flavor that I don't care for and it tastes very salty.  My favorite shoyu is low sodium Aloha brand.

If you'd like to try and make it exactly the way I did, the recipe is as follows:

This experiment turned out great!  I remember doing some tofu cooking experiments years ago.  One of them involved freezing the tofu to dry it out.  This was supposed to help it get a texture closer to meat.  I don't remember if I liked that recipe or not.  But I remember the first step was to press the tofu down to get out as much liquid as possible.  I did that for this recipe.  I wasn't necessarily trying to get a meat texture, but I wanted to make the tofu firmer to withstand what I was about to put it through.

Tofu is pretty bland and will take on any kind of flavor you add to it.  The curry powder added just a light curry flavor.  In retrospect, I would've preferred the curry flavor as a sauce added after air frying.  Regardless, this was still delicious.  So that idea is another experiment that I'll try next time.

If you want to try this, here's the recipe.

I have really been enjoying the quinoa salad from Costco lately.  So I decided that I'd like to try experimenting with different quinoa salad recipes.  An internet search returned a lot of results.  I did a variation of the first recipe that popped up.

Here's the link to the first recipe that showed up in my search.   It's called Favorite Quinoa Salad by Cookie and Kate https://cookieandkate.com/best-quinoa-salad-recipe/

If you have been following me, you know that I love to experiment and sometimes, it doesn't turn out that great.  But I don't care.  It's fun for me.  So here are the things I did differently.
Okay, so if you want to try the version I made, you need to like lemony flavor.  If I made this again,  I'd stick to the recommended amount (1/4 cup) of lemon juice from the original recipe. 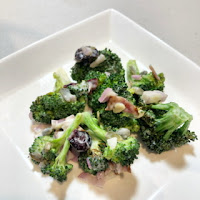 I got a big bag of broccoli from Costco for this week's vegetables.  I can't just have the same regular, plain broccoli all week.  I have to make at least one different style of broccoli.  A google search returned a broccoli salad recipe that was kinda like a cole slaw.  I didn't have all the ingredients, but I pivoted and used what I had on hand.

Here is my variation of it.  I roasted the broccoli instead of having it raw, used pumpkin seeds instead of sunflower, used a shallot instead of red onion, and omitted the salt. 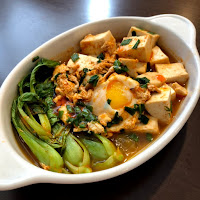 I was so excited to make this.  I had been growing some baby bok choy in my container garden and wanted to cook a dish with it.  I think it could've grew a little longer and got a little bigger, but I was impatient. Lol!  Since I only had a small amount, I wanted to make something that was enough for just one meal.

I need to say that this turned out very salty.  I couldn't stand it and did not drink the broth.  With that being said, I would definitely make this again, but with a different broth.

If you're a salty food fan, you will love this.  So here it is. 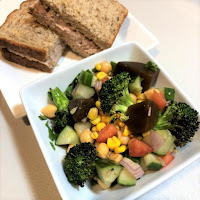 I am trying to get more vegetables in my diet so I need to keep it interesting.  This salad is colorful and that helps stimulate my senses.  It looks nice.  Unfortunately, it was a little bland.  So I decided to add some salad dressing at the end.

You can really add any kind of vegetables or beans you like to this type of salad.  It's also a great way to use up any small bits of vegetables you have in your fridge so they don't go to waste.  This was my way to use up the canned goods I had in my cabinet.

Here's the recipe for the salad pictured above. 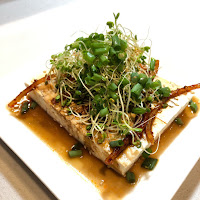 Tofu is super versatile because it basically takes on whatever flavors you add to it.  You can top cold tofu with any kind of toppings you like. After I made this one, I tried making a version with kim chee cucumber and Korean seasoned bean sprouts. That was really good too.

Here’s the recipe for the one pictured above.