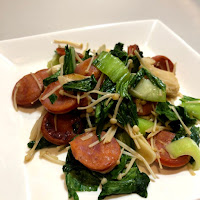 This is a super simple 4-ingredient dish that I put together with random things I had in the fridge.  It's winter and I have been cold a lot, so naturally, I want to eat warm soup.  I bought bok choy and mushrooms with the intent of eating it with a soup.  I added some to a saimin, but then didn't want to eat saimin again and wasn't sure what kind of broth to make to eat the rest.

I didn't want the rest to go to waste.  So, that's when I came up with this stir fry idea.  I've never had stir fried enoki mushrooms, but figured I give it a try.  It was delicious.  I only used four ingredients.  The vegetables are seasoned with the flavors from the sausage.